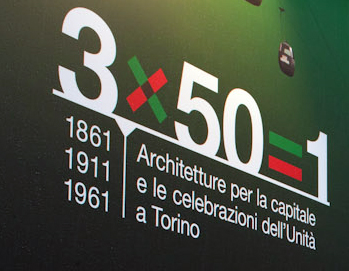 Dedicated to the architectures built for Turin as Capital of Italy and for the two following celebrations of the Unity of Italy (1911, 1961) , the exhibition “3xcinquanta=1″ inaugurated the 2011 “Architecture Festival”. Through photographs of the most significant architectures, the symbolic dates of the Turin’s celebrations of the Unity (1861,1911, 1961) were traced to understand how the city faced the challenges of change by progressively building a new image of itself. We took care of the part dedicated to 1961: the “magnificent and progressive” celebrations represented by the creation of the district of Italia ’61 and the opening of new construction sites, the Labour Palace by Pier Luigi Nervi and the Vela Palace by Franco Levi and Nicolas Esquillan, long-lasting icons – and a complex legacy – of Italy’s ambition for modernity and international recognition in the years of the economic and industrial take-off of the country.

Client: Chamber of Architects of Turin

What we did: curators of the section on Italy ’61 (Project Leader Cristiana Chiorino)