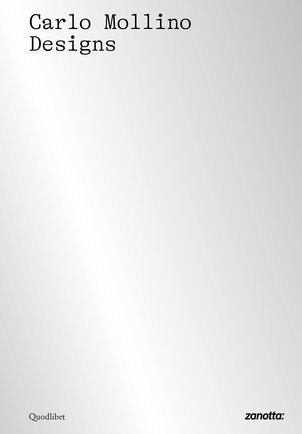 Carlo Mollino (1905-1973), only son of Eugenio, an engineer, was born in Turin. In the early 1930s, Mollino started his professional activity, which was parallel, however, to the unique passions that contributed to his multifaceted and multidisciplinary fame. Indeed, while his work ranged from architecture to design, from interiors to artistic photography, he was also interested in acrobatic aviation, skiing, and auto racing. His very personal and celebrated idea of contemporary architecture developed between the capital of the Piedmont region and the Western Alps. For his interior designs Mollino borrowed from an assorted world of references, which became an integral part of his idea of domestic space.
Carlo Mollino Designs is a new reading of the work of the great architect and designer by way of unpublished archival documents and in light of the mediation that has been carried out by Zanotta since 1981, when the Fenis chair contributed to the growing interest in one of the liveliest and most versatile figures in modern architecture. The works produced by Zanotta described here cover a time frame of twenty-one years: from the projects for the Miller (1938), Minola (1944), and Orengo (1949) houses, all the way to the year 1959 and the Fenis alpine chair conceived for the Politecnico di Torino.